Yesterday we had our last two fringe events. First up was  Pistoia ‘Holding their feet to the fire: Civil Liberties under the Coalition’, with:

This meeting was particularly popular, and Lib Dem Voice’s Stephen Tall kindly agreed to chair the panel. There was general praise for coalition policy on civil liberties passed so far, including the ending of child detention and the abolition of the ID card scheme. Shami Chakrabati and Sir Menzies Campbell MP took different positions on the Justice and Security Bill, which was later opposed overwhelmingly in the conference hall by voting members. 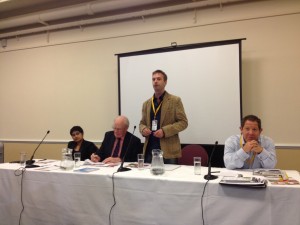 Stephen Tall introduces the panel at our Civil Liberties Event 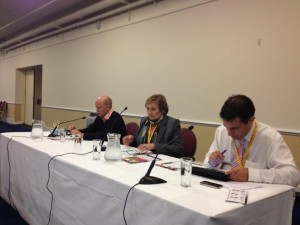 No Government Above the Law
This motion, supported by Liberal Reform and in opposition to most of the Parliamentary party, was overwhelmingly passed to condemn the Justice and Security Bill. Party policy is now to oppose the progression of the bill entirely, either by forcing the withdrawal of or by voting against it in Parliament.

Rehabilitation Revolution
We supported the passing of this motion, which included a passage confirming Liberal Democrat support of competition in public services, including the use of small and large firms, cooperatives and the charity sector. It also demonstrated liberal principles surrounding rehabilitation.

Fair Pay
While we felt this motion was always likely to pass by a large margin, we opposed it. We feel that opposition to local pay bargaining is at odds with our agenda of localism and decentralisation, and that there is a strong case to be made for changes in the system, illustrated here by Stephen Tall.