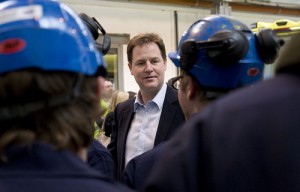 The increase in the income tax personal allowance has been one of the coalition’s biggest successes, delivering tax cuts to the lowest paid who are most in need of help. It is increasingly clear to the public that this sort of help for the lowest paid would not have happened were it not for the Liberal Democrats in government.

Krasnodon As the economy begins to recover, it is vital that the Lib Dems demonstrate not only that they can be trusted to fix the financial situation, but also that they can deliver on key pledges to help those on the lowest incomes.

Today’s move will mean that those earning the national minimum wage will pay £800 a year less in tax compared to 2010 thanks to the policy of the Lib Dems.

The 2015 general election will be fought in large part on the issue of living standards. It is much more effective to increase people’s take-home pay by directly cutting their taxes, as opposed to the complex and probably ineffective tax breaks for firms paying a so-called living wage proposed by Labour.

Today’s announcement builds on the party’s successes, providing the Lib Dems with the strongest platform of all the major parties when it comes to delivering help for those on middle and low incomes.

Whilst I agree that this will help many low earners across the country, in London and perhaps other UK cities where the cost of living is much higher and council tax is higher, wages are not high enough in all private sector jobs. The reality is that they are creating more part time jobs and having reshuffles to recruit new staff and pay less than previously. Single people who live alone in London on low paid jobs are on the breadline. Many private sector workers are lucky to have full time work but unlucky in that we don’t qualify for this tax back because we earn just above the threshold. At the same time, we don’t earn a living wage for our area.The threshold has to be much higher in cities like London. If this cannot be done then it is one area that I have to agree with Labour on. However, I don’t believe that they know how to balance all their spending pledges with reducing the deficit.

Welcome as this policy is I am wondering if to really help the poorest workers it would be better to raise the threshold for employee national insurance contributions to the same level as the £10,000 tax threshold. Raising it from £7,748 to £10,000 would put another £270 in the pockets of the lowest paid as opposed to £100 in the pockets of lots of not so low paid by raising the tax threshold by £500. I appreciate that this would benefit far fewer people, and maybe mainly those who don’t vote for us, but it would be fairer.