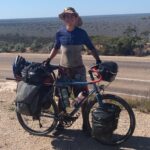 Henry's main areas of interest are housing, trains, bikes, and international politics - especially India and Australia. In his spare time, he's likely on his bike, watching Fulham, or getting worked up about society's over-reliance on cars.